Albania became independent in 1912, after nearly 500 years under Ottoman rule. In the Ottoman Empire, the Albanians had sometimes revolted against the government, but were largely loyal subjects and contributed to the stability of the state. The outbreak of the first Balkan war in October 1912 changed the situation and the strategy of the Albanian leaders. The Christian neighboring states had joined together to divide what was left of the Ottoman territories in Europe. Albania is scheduled to be split between Greece, Bulgaria, Serbia and Montenegro. This prompted the Albanian leaders, led by Ismail Qemali, to declare independence in the port city Vlorë in November 28, 1912.

The existence of the new state was threatened by neighboring armies. However, for strategic reasons, Austria-Hungary and Italy were interested in Albania’s existence and not sharing between Serbia / Montenegro and Greece. Consequently, at a conference in London in December, the great powers accepted Albanian independence. The boundaries were set after long negotiations in December 1913 (the Florence Protocol). Balance of power weighed heavier than ethnic conditions, so that significant areas of the Albanian majority, to just under 1 million people, were assigned to Montenegro and especially Serbia (Kosovo). The border with Greece was drawn through an area of ​​mixed population and unclear ethnic boundaries, so that some Albanians came to Greece and some Greeks to Albania. 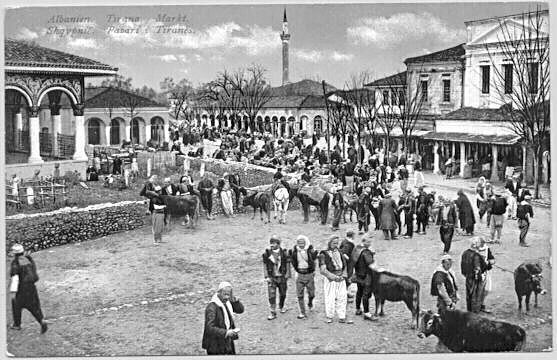 The great powers appointed a Protestant German prince, Wilhelm von Wied, to the prince, who arrived in March 1914. In May 1914, a pro-Ottoman revolt broke out among Muslims in Central Albania, which soon spread around the country. Wilhelm, who had initially been ill-suited to the task, was forced to give up and leave the country in September of that year. Shortly thereafter, the rebels seized the port city of Durrës, hoisted the Ottoman flag and offered the crown to the Sultan or a Muslim prince. However, this political project fails due to opposition from Esad Pasha Toptani, who established a temporary government in Durres in October.

Meanwhile, the First World War had erupted and the new state collapsed. Albania declared itself neutral, but became a battleground for Greece, Italy, Serbia and Montenegro. During the war, the Entente powers pledged most of Albania to Italy, Serbia, Montenegro and Greece in the secret London agreement of 1915. The bit left in Central Albania was to be represented by Italy and the other great powers.

On the Albanian side, politics during the war years were dominated by struggles between personal, regional and group interests, some of them along religious divides. Powerful Muslim landowners in southern Albania opposed land reform, while the politicians who supported this elite faced opposition from Orthodox peasants. The northwestern city of Shkodra did not accept Tirana as its capital, and the Catholic clans of the Highlands of the north were skeptical of any form of centralized rule and Muslim rulers in general. Others again worked to include the Albanian-inhabited areas of Kosovo and Northern Greece.

After the war, however, the borders of 1913 were restored to a superpower conference in 1921, with the exception of some lands in the north, northeast and south, Çameria (Kameria). Albania’s sovereignty was recognized by the League of Nations in 1920, with membership the same year. It was not until 1923 that the Greek army withdrew from southern Albania (Vorio-Epiros, Greek) which it had taken in 1914.

The young state had thus had a tough political start, and the first turbulent years of Albania’s independence had a major impact on the nation-building process. The great recognition of Albania by the great powers compared to neighboring states had made many Albanians aware of external threats. In addition, for several years after the war, there was a real territorial threat from Greece, Serbia and Italy. Many Albanians were also deeply distrustful of the central administration. 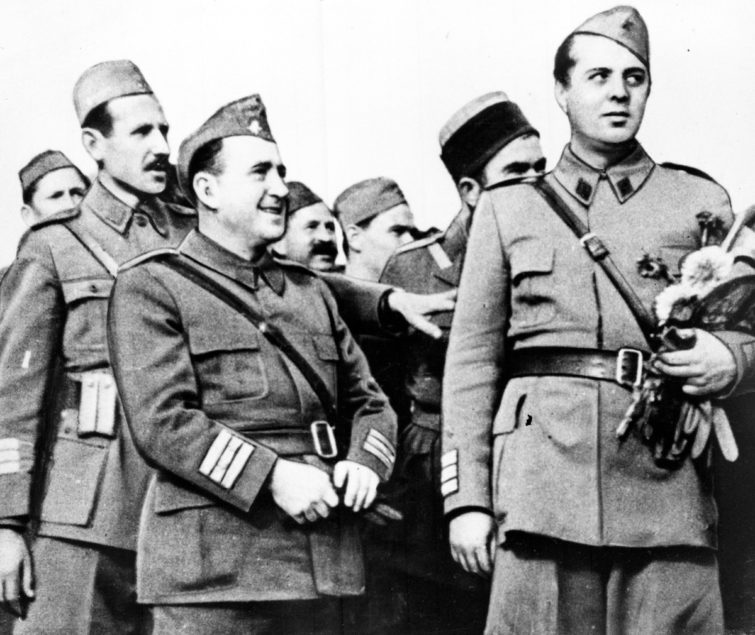 Enver Hoxha was Secretary General of the Albanian Communist Party and Albania’s Head of State from 1943 until his death in 1985. The picture shows Hoxha (right) along with party members Mehmet Shehu (back left) and Kochi Gorgi (front left).

The first elections were held in 1921, but no real party was developed. The two leading political rivals were Ahmet Zogu and Fan Noli. Zogu was an influential clan leader from northern Albania and had a lot of political experience. Noli had his education from the United States, where he had been a bishop of the Orthodox Albanians there, and was central to the struggle to have a self-governed Albanian Orthodox church that was not subject to Greek control.

Noli had a more liberal political attitude than his competitor Zogu, who became prime minister and interior minister in 1922. Despite strong police efforts in the 1923 elections, Zogu did worse than expected. When a popular opposition leader, Avni Rustemi, was assassinated in 1924, large demonstrations erupted and Zogu fled the country. A government headed by Fan Noli took over. Democratic program statements could not hide a confusing domestic policy. Expectations for measures for greater social equality were not met, promises of democratic elections were not implemented, and the country did not receive foreign credits.

Discontent increased, and in December 1924 Zogu carried out a coup with military support from “white” soldiers of the Russian civil war who lived in exile in Yugoslavia. He also had support from the Yugoslav government, and stated his ambition to take Kosovo back. Zogu’s rule was dictatorial, but with constitutional elements in the facade. In 1925 he was elected president, and in 1928 he was proclaimed king under the name of Zog 1. 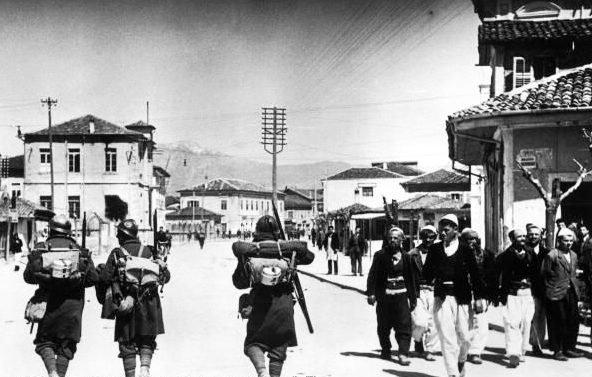 The social and economic conditions of the early 1920s were among the weakest in the region, and Albania was virtually devoid of any kind of infrastructure to function as a state. Agriculture was lagging and dominated by narrow landlord interests. When the country finally obtained a larger foreign loan, interest rates quickly became problematic. At the same time, a modern state began to take shape through legislation, expansion of public administration and improvement of roads.

Despite Yugoslav support for the coup in 1924, Zog realized that it was Italy that was best able to provide financial support for the development of the country. Among other things, Italian capital played an important role in the establishment of the Albanian National Bank in 1925. The bank was headquartered in Rome. In this way, Italian interests gained control of the Albanian economy. Italy also demanded political backing for its involvement, and in 1926 and 1927 the two countries signed friendship and security agreements that gave Italy great influence, including over the Albanian army. Italy was also granted licenses to exploit its natural resources.

Zog gradually became concerned that the addiction might jeopardize his own power, and sought to balance the Italian influence. Among other things, British officers were commissioned to train the gendarmerie. Nationalist plays in the school system in 1933 should serve the same purpose. All schools financed from abroad should be closed. It affected not only Italy, but also the Greek minority in southern Albania. Greece was sentenced to Albania in the International Court of Justice in The Hague. Italy ceased all credit and allowed warships to demonstrate Italian naval power outside Durres in 1934. Some time later, economic relations resumed. But Italian dictator Benito Mussolini was not happy with that. In 1939, Albania received an ultimatum to accept a Customs and Monetary Union and military support points. When this was rejected, Italy sent on Friday 1939 an army of 100,000 men supported by aircraft and navy to occupy Albania.

In many ways it was the interwar period in Albania characterized by instability, political intrigue, consolidation of the state, a rising sense of national unity, Ahmet Zogu’s authoritarian rule and the failed attempt to stoke neighborly interests. At the same time, at the end of Zog’s rule, the Albanians had to some extent begun to accept the central government and not just fight for regional and group interests. Zogu also put a stop to the road robberies and brought the clans in the north into the economic system. In addition, he took national control of the many foreign educational and religious institutions that had often functioned divisively. From this perspective, it can therefore be said that Zogu has largely succeeded in consolidating the nation-state by strengthening the central government and the state apparatus, bridging religious and regional contradictions, interreligious unity against external enemies. 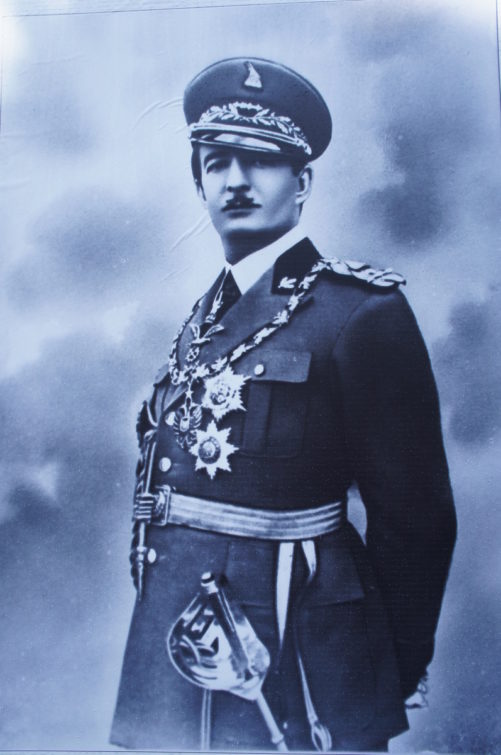 The Albanian government was not prepared militarily for the Italian occupation in 1939, and the Italians encountered only occasional resistance. Zog fled to Greece. With the help of cooperating Albanians, work began to establish a union between the two countries. Italian King Viktor Emanuel 3 was also given the title of Albanian King. The Italians sought to establish a fascist social order and initiated considerable public works to consolidate their rule. Plans to allow Albania to take over areas with Albanian population in Yugoslavia (Kosovo) and Northern Greece (Cameria) should also increase popularity. The plans were first realized in 1941 when Adolf Hitler became involved in the Balkans. By then, in October 1940, Italy had made an unsuccessful attempt to conquer Greece from Albania. The Greeks beat back the Italians and occupied half of Albania before Germany came to Italy through the attack on Yugoslavia and Greece in April 1941.

The opposition to the Italian government was seriously organized in 1942. At a meeting in Pezë near Tirana, a “National Liberation Movement” was formed. Communists dominated the leadership. In response, a month later, a “National Front” (Balli Kombëtar) was formed as an anti-communist coalition from moderately conservative to radical. They wanted a modern republic and were against Zog’s “feudal” rule. At the same time, they wanted Kosovo to fall to Albania after the war. It sharpened the opposition to the communist resistance movement, which was strongly influenced by Yugoslavia. The Albanian Communist Party was founded as late as November 1941 (local groups had existed before), and partly after the Yugoslav initiative. Enver Hoxha became the first Secretary-General. After a while, there was also a royal-friendly partisan movement, led by Abas Kupi.

The battles against the Italian occupation often turned into a settlement between the Albanian resistance movements. On the whole, World War II in Albania was also largely a civil war, such as in Yugoslavia, although there were attempts to unite the forces. When Italy capitulated to the Allies in 1943, Germany took control of Albania, abolished the union with Italy, and declared Albania a “neutral state”. At the same time, the Germans confirmed the border changes at the expense of Yugoslavia and Greece. As a result, the new German prison government received support from parts of the “National Front”. Thus, the communist partisans could more easily portray their struggle against other groups as part of the anti-fascist fight and deny that there was also a civil war.

The Communists also received more support from the Western Allies than other groups. Following the Yugoslav model, in May they had set up an “Anti-fascist National Liberation Council” in Përmet with Enver Hoxha as leader. When the Germans withdrew in the fall of 1944, the communists had all the victories in the civil war. In October, Hoxha became head of a provisional government in Berat. It moved to Tirana in November. Hoxha had control of Albania until his death in 1985.