In 1905-07 there was a revolution in which, in addition to the industrial proletariat and the intelligentsia, large sections of the peasantry turned against the tsar. The tsarist regime succeeded in saving through the use of the military. The Tsar Nicholas II. Agreed one in the election Parliament, the Duma, and initiated a land reform. The beginning of the First World War in 1914 prevented these measures from developing. After initial successes in the war, the Russian army suffered territorial losses. In the Russian Empire there was a long winter in 1916/17 and crop failures that resulted in famine. In the third year of the war, Russia faced a catastrophe economically. After mass demonstrations in the capital, Petrograd(Saint Petersburg) and the storm of the Winter Palace Tsar Nicholas II abdicated. The multi-ethnic Russian state was about to dissolve: Finland, Estonia and Latvia, Lithuania, Poland, Belarus, Ukraine and Georgia declared themselves independent.

A bourgeois Provisional Government was formed to continue the war. It was after a short time by a Council of People’s Commissars chaired by Lenin replaced. From the October Revolution following civil war between “red” (communist) and “white” (monarchist), republican and other anti-Communist forces were the Communists in mainland Russia emerged victorious. In 1921 the Russian Federative Socialist Soviet Republic (RSFSR) was proclaimed.

On December 30, 1922, the merger of all Soviet Socialist Republics to form the Soviet Union was decided and a state-controlled economic policy was proclaimed. In 1924 Lenin died and his successor Stalin covered the country with a terror regime. The violent collectivization of agriculture, with the simultaneous build-up of large industries, led to devastating famines. Since 1928 the state economy has been subject to five-year plans, and the industrialization and expansion of the infrastructure, especially in the Asian part of the country, has been promoted.

The non-aggression pact signed with Hitler’s Germany in 1939 brought the Baltic states, eastern Poland and northern Bukovina under Soviet rule. After Germany’s invasion of the Soviet Union on June 22, 1941, the Red Army joined the Allies in the Second World War. In the first months of the war it lost millions of soldiers, large parts of the western parts of the country were devastated, and later over a million civilians died of starvation during the siege of Leningrad. At Moscow, Stalingrad and Kursk the Red Army inflicted heavy defeats on the German troops and finally captured Berlin in May 1945. The ” Great Patriotic War”Over nine million Soviet soldiers and an even higher number of civilians were killed.

After the end of the war, from which the Soviet Union emerged as a victorious power, tensions between Stalin and the Allies became increasingly apparent. In the course of the peace negotiations, the Soviet Union secured great influence on the neighboring countries of Poland, Czechoslovakia, Romania and Hungary as well as on Bulgaria and the GDR. Hundreds of thousands of Soviet soldiers remained stationed in these countries. The Soviet Union, along with the USA, had become a superpower and in 1949 a nuclear power. In 1955, the Warsaw Treaty was signed in response to the creation of NATO. The 60’s brought foreign policy including through the Cuban missile crisis, a renewed intensification of the Cold War. Aspirations for sovereignty in the Eastern Bloc countries were suppressed by force. The cold war dominated world politics until 1989.

Collapse of the Soviet Union

In 1985, the newly elected General Secretary Gorbachev began a policy of economic and political openness that was associated with the terms “perestroika” (reconstruction) and “glasnost” (public). By including market economy elements, he introduced a modernization of Soviet economic structures, and the press was also given more freedom. In 1989 the first free parliamentary elections were held. The Soviet Union signaled its readiness to disarm the West. From the end of the 1980’s, the Eastern Bloc countries were also granted more political freedom of movement.

In 1991, conservative communists staged a coup against Gorbachev in Moscow in the August coup in order to prevent the signing of the new union treaty and further reforms. Boris Yeltsin, elected president of Russia in 1991, and representatives of the Soviet republics decided to dissolve the Soviet Union. In 1991 the Warsaw Pact was dissolved and Russia founded the Commonwealth of Independent States (CIS) together with the declaring independent countries Belarus, Ukraine, Moldova, Armenia, Azerbaijan, Kazakhstan, Kyrgyzstan, Tajikistan, Turkmenistan and Uzbekistan. Since 1992, the Russian Federation, as the largest former Soviet republic, has been exercising the rights and obligations of the USSR under international law.

According to cheeroutdoor, the political changes provoked an armed revolt in Moscow in 1993, which was suppressed by President Yeltsin. In December 1993, the Russian people approved the new constitution (two-chamber system, presidential administration) by referendum. In the elections to the Duma in December 1993, the nationalist Liberal Democratic Party and the communist KPRF gained strength. Under Yeltsin, parts of the economy in Russia were privatized and democratic reforms were carried out. However, both of these failed to achieve their goal and led to the collapse of the economy, high inflation and political destabilization.

In 1996 Russia joined the Council of Europe and at the same time founded the ” Community of Independent Republics ” together with Belarus. In 1996 Russia was one of the founding members of the Shanghai Five, today’s Shanghai Cooperation Organization (SCO). The NATO-Russia Founding Act followed in 1997 and a partnership and cooperation agreement with the European Union came into force. Russia sees cooperation in the NATO-Russia Council as an important element of cooperation with the West. In 2002 Russia acquired full membership in the G8, which was revoked in March 2014.

The Russian government has been confronted with independence movements in the republics since the mid-1990’s. In two Chechen wars (1994-96 and 1999-06) Russian troops brought most of Chechnya under their control. The result was massive waves of refugees and extensive destruction of the infrastructure.

After Yeltsin’s resignation, Vladimir Putin was appointed interim president. In 2000 he was confirmed in office and carried out this with great power even after his re-election in March 2004. In the 2003 Duma elections, the United Russia party, which is close to Putin, won an absolute majority of the seats. 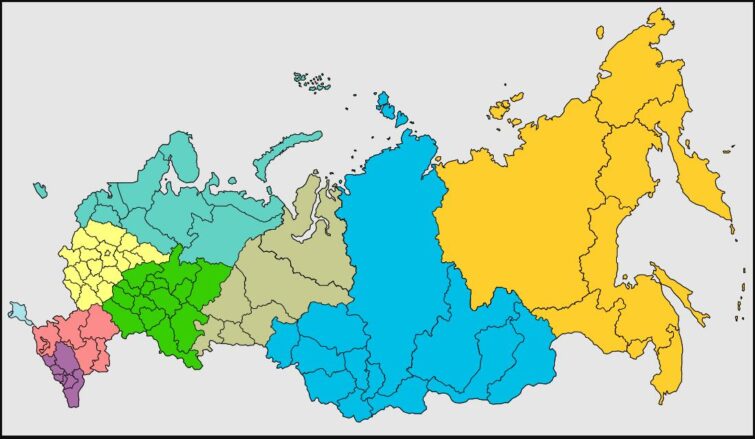