Although censorship is prohibited by law, most of the media in Russia is under direct or indirect state control. The scope for dissenting opinions, independent media and organizations is getting smaller. Critical media like TV Doschd or Radio Echo Moskwi regularly come under pressure. Journalists have to reckon with violence or targeted attacks, most of which remain unpunished. More than 50 reporters have died since the end of the Soviet Union. Anna Politkovskaya, known for reports and books about the war in Chechnya and corruption in Russia, was murdered in 2006.

The arrest of investigative journalist Ivan Golunov, who was researching corruption in the funeral and construction business in Moscow, had sparked an unprecedented wave of solidarity. The leading Russian premium newspaper “Kommersant”, “RBK” and “Vedomosti” are the same front page “We are Golonuw” appeared to against the actions of the Moscow police against Golunow protest. Ivan Golunov was released after six days of detention and house arrest.

In the Reporters Without Borders 2020 Index of Press Freedom, Russia ranks 149th out of 180 countries.

According to ehealthfacts, the Russian media system is very one-sidedly dominated by television. The five largest television stations are state-owned or controlled by the state: Kanal 1, which has a reach of 98% in Russia and can also be received in many CIS countries, RTR Rossija, to which around 90 regional TV stations and radio stations, some of which broadcast in minority languages, include TV-Zentr, Ren TV and NTV. The television is far from providing a balanced report on domestic and foreign policy issues. The national television channels are sometimes used for controlled critical campaigns in the domestic power struggle.

The national radio stations Radio Rossii and Mayak as well as 95 regional stations of the Russian state television and radio company VGTRK belong to the state radio. There are several private, mostly entertainment-oriented FM stations in all major cities. The radio stations Russkoye Radio (20%), Europa Plus (16%) and Mayak (13%) have the highest ratings. The independent broadcaster Echo Moskwi only achieved 2%. 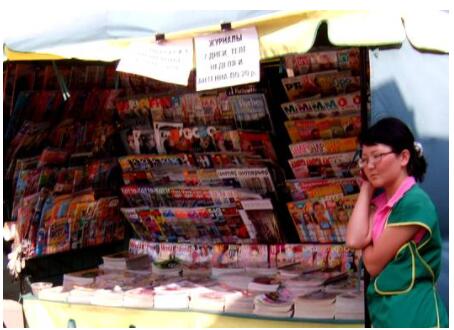 There has been considerable momentum in the Internet media, which continues to show considerable growth rates. 78% of the adult Russian population uses the Internet. Providing IT to the country is one of the government’s priorities. Still, it remains a metropolitan phenomenon for now. The most important Russian websites are the search engines Yandex and Rambler, the mail service Mail.ru, and internet services such as lenta.ru, gazeta.ru and vesti.ru. The influence of the internet media and that of the blogger scene(such as Project Snob; Blogger Navalny), as an outlet for independent and critical expressions of opinion, are growing.

In July 2012, the parliament passed a law on freedom on the Internet, with which authorities can in future block websites without a court decision. Child pornography, the glorification of drug use and calls for suicide are listed as reasons for a ban. However, opponents fear political abuse and censorship. According to the laws adopted by the Duma and the Federation Council in March 2019, there is a risk of heavy fines or even arrest for disseminating false information on the Internet from the authorities’ perspective. A lack of appreciation for state institutions and symbols is also punishable. Parliament is currently deliberating on a law on an independent Internet that makes Russia independent of the global network with an autonomous infrastructure. Thousands of people in Moscow protested against the plans.