Russian is the only official language used everywhere. At the same time, the respective vernacular is used as the second official language in the individual autonomous republics (such as Tatar, Bashkir, Buryat, Mari etc.) The languages of the small indigenous peoples are protected by law. In the European part of Russia there are three linguistically different areas: Northern, Central and Southern Russia, which are further divided into individual dialects. Despite the great distances, the dialects in Russian are far less pronounced than in the German-speaking area.

Today’s Russian alphabet, which consists of 33 letters, arose from the one in the IX. Century developed font “Kyrillica”. This font was named after the Greek scholar Kyrillos, who is said to have designed it together with Methodios. The two “Slav apostles” are venerated as the founders of the Russian language and were canonized by the Russian Orthodox Church. The Cyrillic alphabet is the only official script, and the policy is that all respective languages are written in Cyrillic.

According to historyaah, Russia inherited today’s education system from the Soviet Union, which financed the entire education system from the state. The withdrawal of the state and the financial crisis paralyzed the reform of the education and science system in the 1990’s. A fundamental paradigm shift ushered in the approval of private educational institutions and the abolition of the state monopoly on education. Today around 10% of Russian students study at non-state universities. A large number of new school types emerged, such as grammar schools and lyceums and other non-state schools with reform pedagogical approaches. In the area of vocational training, too, a private network is emerging alongside the state network vocational schools. The state consolidation policy has brought new impulses and changes in the education sector since 2000. The state saw education as an important pillar in the economic modernization process and began again to make more funds available for education. In 2017, the state spent four percent of the central budget on education.

In 2003 Russia joined the Bologna Process to promote the competitiveness of the Russian education system. In parallel to the classic five-year diploma training, the two-stage BA / MA system (4 years Bachelor, 2 years Master) has been introduced across the board since autumn 2007. The adoption of a “federal target program on the development of education from 2006 to 2010” was closely linked to the integration into the “Single European Education Area”. The deficits of the Russian education system should be eliminated through improving quality, modernizing content and technical equipment, and through more effective management and the introduction of market economy structures. The accelerated expansion of the Internet at schools and universities is intended to promote integration into the international knowledge community.

As the first measure of a long-term educational reform, a uniform final examination was introduced nationwide in 2010, which is also intended to largely replace the university entrance exams that have been widespread up to now. Foreign languages can be taught from the second grade. The reform of the education system is to be implemented in stages by 2020. The change to more competition is to take place via the education vouchers, the so-called GIFO (state nominal financial obligations). The education vouchers are linked to the results of a standardized state Abitur examination (EGE): the better the examination results of the Abitur graduates, the less they have to pay for their studies themselves.

The Russian higher education landscape is undergoing profound changes. A dualistic system is currently emerging: On the one hand, 45 so-called leading universities, which include the two state universities in Moscow and St. Petersburg, nine federal universities and, as a further group, the 34 national research universities. You have prevailed in an excellence competition and receive considerable additional funding. On the other side are the remaining universities, which in future will only be funded depending on the number of students enrolled. Also the structure of the Academy of Sciences of Russia will fundamentally changed. In the future, a state science agency will control the fate of the institutes. With these reforms, Russia wants to join the world leaders in research. In order to win young people back into research, Russia will in future give more money to young scientists and relax legal regulations. The universities can now keep talented scientists in research and attract excellent young researchers from abroad.

The compulsory education of nine years in Russia; School attendance is free of charge at state schools. Due to the demographic development, the number of students has decreased by around a quarter in the last five years. The school system is divided into a four-year elementary school and a five-year basic level. This is followed by a three- tier education system: In addition to the eleven-grade middle school (graduation: university entrance qualification), there is the option of attending a vocational school (one to two years, qualification: specialist certificate) or two to three years of training at a technical college(Degree: Technician Diploma). Most of the students then decide to attend the two-year middle school, which ends with a university qualification. In the Pisa ranking of 2015, Russian students came in 23rd out of 72 countries in mathematics, 32nd in science and 26th in reading comprehension.

The return of the state to education was expressed in the introduction of uniform educational standards and a limitation in the number of state textbooks. In connection with this policy is a partial return to Soviet elements (new textbooks in history lessons, military training, establishment of youth organizations), combined with the strengthening of a patriotic awareness. 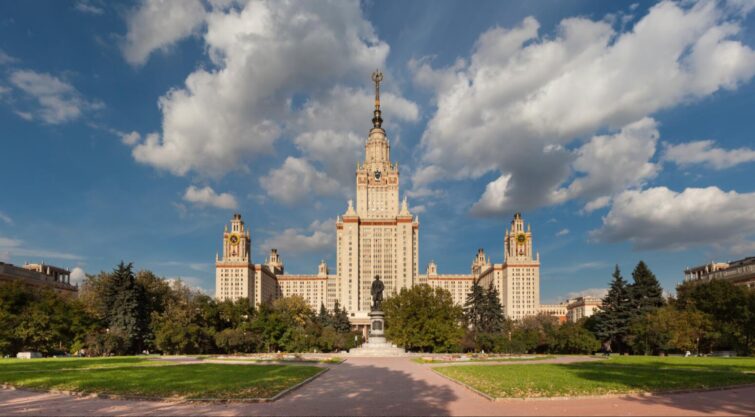