Russia is one of the largest producers of raw materials in the world and has significant resources with a quarter of the world’s gas reserves (25.2%), around 6.3% of the world’s oil reserves and the second largest coal reserves (19%). The lack of diversification of the Russian economy leads to a disproportionately high dependence of economic development on the income from the sale of oil and gas. Raw materials represent around 70% of exports and finance around 50% of the state budget.

Since the turn of the millennium, the Russian economy has been one of the fastest growing major economies in the world, with average annual growth of almost 7%. Economic stabilization was the greatest achievement of Vladimir Putin’s first presidency. The decisive factor for this was the ability to use the enormously increased export revenues intelligently. The national debt in relation to GDP almost completely disappeared: it fell from 51% to 4%. The creditworthiness of the country has thus been increased considerably. Domestic demand grew due to the income from raw material exports. The state accumulated the third largest foreign exchange reserves in the world, as well as a reserve fund and a fund for national prosperity. In strategically important economic areas (from space technology and nuclear power to shipbuilding and aircraft construction) the state strengthened its position by founding state corporations. Holdings, which, as umbrella companies, combine state holdings in individual companies in an industry, played an important role.

According to extrareference, the international financial crisis that broke out in autumn 2008 hit Russia very hard. The Russian government was able to respond to the Russian financial sector with government funds and then finance an extensive economic package, which included tax breaks and government loan guarantees, from the reserves. Negative economic growth of 7.9% in 2009 was followed by growth rates of over 4% in 2010-2012: The growth was supported by high raw material prices, but also by growing employment and rising industrial production. The high international energy prices ensured sustained economic growth in 2012. Industrial production rose, but the growth was below the previous year’s figures. The unemployment rate fell from 7.2% to 5.4% between 2010 and 2012, and average wages in 2011 and 2012 were significantly higher than before the financial crisis of 2008/9. So while 2012 was satisfactory for Russia overall, was weak in 2013 due to the economic weakness in the euro area and the global decline in raw material prices. The country has entered a phase of prolonged economic stagnation. At the same time, Russia rose in the ranking of “Doing Business” from 112th place in 2012 to 92nd place in 2013 and 64th place in 2014 to 28th place in 2020. The national debt in Russia is still comparatively moderate at around ten percent of GDP. Both high gold and currency reserves and the two state reserve funds fed by raw material income represent a safeguard for the country.

Structural deficits, financing problems and trade restrictions through sanctions by the USA, Canada, Japan and the EU slowed economic growth. In particular, the decline in investment and the focus of state financial aid on priority areas are reinforcing this trend. The complicated geopolitical environment and the realignment of industrial subsidies mean that projects are postponed for the time being. Economically, Russia is approaching the PRC. This process has become more intensive with the start of the Chinese integration project ” Belt and Road Initiative “.

In 2020, Russia ranks 94th among 180 countries in the Index of Economic Freedom. The poor investment climate is reflected in a low rate of foreign investment. Bureaucracy, corruption and legal uncertainty are holding back economic development.

Since the beginning of 2014, the national currency has lost more than a third of its value compared to the euro, among other things due to the western sanctions due to the Ukraine crisis and the falling oil price. As a result of the collapse of the currency, prices for consumers have risen considerably; the inflation rate was around 15% at the end of 2015. In 2015, the Russian economy fell into a severe recession. After the GDP decline of 3.0% in 2015, the GDP decline continued at 0.2% in 2016.

After the two-year long recession, the Russian economy recorded positive figures in several segments in 2017: gross domestic product (GDP) rose by 1.5 percent in 2017 compared to the previous year and thus bottomed out after the crisis. Real wages are rising slightly again after two years of crisis. The national average unemployment is at a moderate level.

According to the statistics agency Rosstat, the Russian economy grew by 2.3 percent in 2018 thanks to the robust domestic economy. The opening of a gas field on the Yamal peninsula with a volume of 24 billion euros contributed to the booming construction industry. The soccer world championship brought further positive effects, with a plus of 6.1 percent in the catering and hotel trade. The increase in the general rate of VAT from 18 to 20 percent at the beginning of 2019 put a strain on consumer demand. Economic growth was 1.3 percent in 2019.

The coronavirus pandemic, combined with the low oil price, is leading to a recession in Russia. The Ministry of Economic Affairs is forecasting a 5 percent decline in GDP in 2020 and only 2.8 percent in 2021.

Since March, the Russian government has adopted several aid packages to support business and citizens, as well as a national economic stimulus plan. 15 new large-scale projects receive state co-financing from the National Prosperity Fund and from the budgets of the national target programs. This is intended to give the country’s economy, which was affected by the corona crisis, growth impulses. The new projects include bridges, motorway and railway lines, a transshipment terminal for liquefied gas on the Yamal Peninsula and three nuclear icebreakers.

In the long term, economists and authorities fear a slowdown in the economy if structural reforms fail to materialize. These are necessary because of the decline in the working population and Russia’s heavy dependence on oil and gas exports. 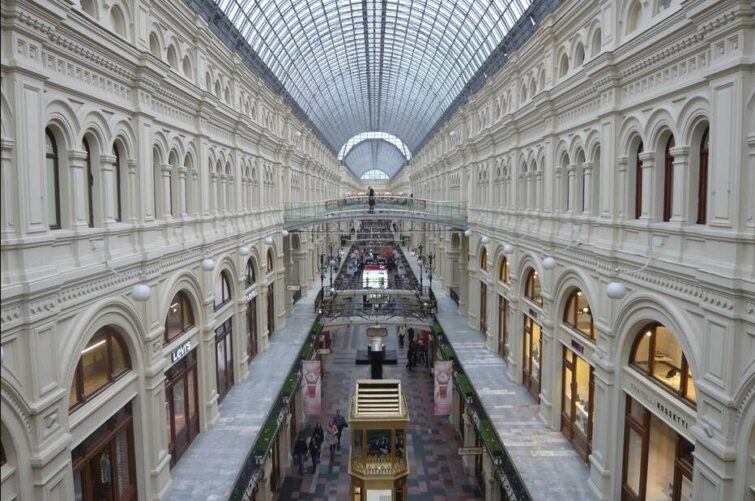