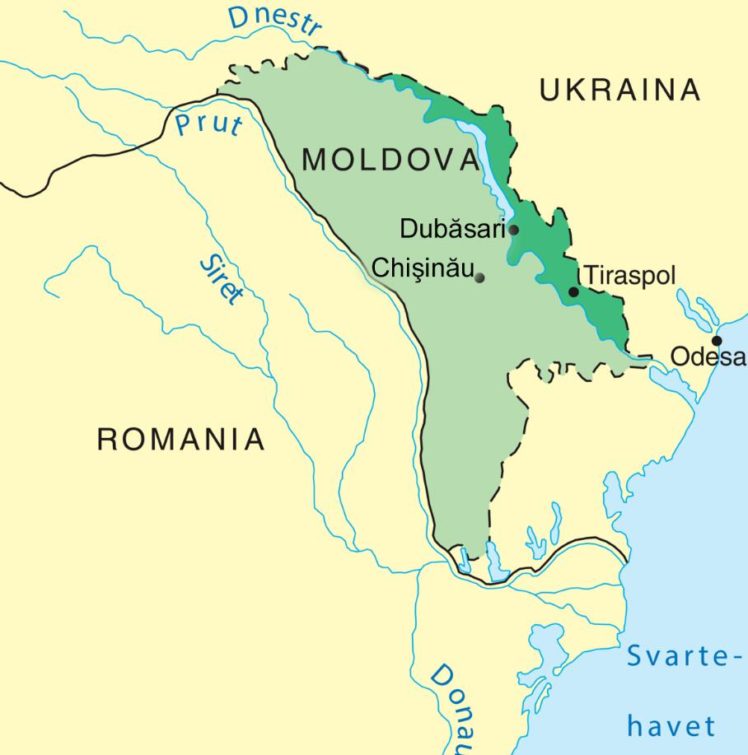 In the Transnistria region (highlighted in dark green), Russian Communists declared in 1991 an independent “Dnestr Republic”, with a long-term goal of becoming part of the Russian Federative Republic (Russia). This led to armed clashes in 1991–92 with great loss of human life. The Moldovan constitution takes into account that Transnistria has a special status, but it is still not clear how this is to be practiced.

In the first millennium BC the area of ​​the present state was inhabited by, for example, goats and shooters. For a time, the influence of the Roman Empire was strong. During the migrations, the open landscape led to many invasions and changes of power. From the mid-1300s, the Principality of Moldova arose. Its original core area lay in what is today the Romanian region of Moldova. After a few decades, the area between the Prut and Dnestr rivers (much like the current Republic) became part of the Principality. From the 16th century, the Principality of Moldova was a vassal state during the Turkish Ottoman Empire. Some smaller areas in the south came under direct Ottoman rule. Russian pressure against Moldova began in the 18th century, and in 1812 Moldova had to relinquish the eastern half of the principality to Russia. From then on, this area was called Bessarabia. 85 percent of the population were Moldovans with Romanian as their mother tongue. Initially, the Russian government was relatively gentle, but in the late 1800s it put in a strong Russification.

World War I and the collapse of the Russian tsarist kingdom led to secession from Russia and union with Romania in 1918. The association was recognized at the Paris Peace Conference in 1920, but not by the Soviet Union. Through the secret supplemental protocol to the German-Soviet non-attack pact in 1939, Germany accepted that Bessarabia should be a Soviet area of ​​influence, and in 1940 Soviet forces moved in after an ultimatum to Romania. A separate Soviet Republic was created. Between 1941 and 1944, Romania, which was then allied with Hitler-Germany, occupied the country, which was especially affecting the Jews. In 1944, Moldova became the Soviet Republic again, and a strong political alignment was implemented, including with extensive deportations. and Russification.

From 1989 there were large demonstrations in favor of increased use of the Romanian / Moldovan language. Free elections in 1990 led to the National Assembly declaring the country’s sovereignty in 1990, and its independence in 1991, like most other Soviet republics. Many inhabitants, especially Slavic speakers, were afraid that there would be a new union with Romania, and the Slavic-dominated area east of Dnestr declared itself a republic ( Transnistria ) in 1990. There was a state of war between the central government and the outbreak from 1991 to 1992, after which Russian “peacekeeping” forces were stationed there.