Macedonians make up about two-thirds of the population while about one-fourth are Albanians. In addition, the country also houses small groups of Turks, Romans, Serbs, Bosniaks and Vlachs, among others. Since 2019, Albanian is the official language alongside the Macedonian. 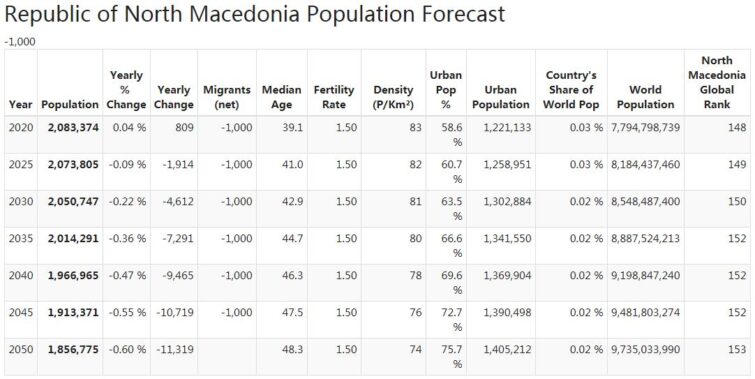 Data on the size of the population is based on estimates, no census has been held since 2002. A new census would have started in 2011, but it has been postponed until further notice as disagreement prevails, among other things, about who should be included in the population. High unemployment, among other things, has led many residents to live shorter or longer periods of their lives abroad. Poverty has also caused hundreds of thousands of residents to leave the country, most of them for Italy and Germany. According to the World Bank, Northern Macedonia lost a quarter of its population between 2000 and 2015.

The Macedonians are mainly concentrated to the capital Skopje as well as to the valleys of the river Vardar in northern and central Northern Macedonia. Albanians live mainly in their own communities in the countryside in the west, but there is also a large group of Albanians in Skopje. In the border areas against Albania, the Albanians are in a clear majority.

Albanians have the highest birth rates in Europe. Their lifestyle, religion and culture differ from Macedonians and marriages across national borders are unusual.

The status of the Albanian minority has long been a source of conflict. Albanian leaders have protested that Albanians have not been equated with Macedonians, for example with regard to the right to use their own language in contacts with the authorities and in education or the possibility of obtaining a public service. The Macedonians, for their part, see the Albanians’ demands for equality as the beginning of an Albanian outbreak from Northern Macedonia and thus a threat to the country’s cohesion. In early 2001, riots arose and the country was soon on the brink of civil war. Thanks to the efforts of the outside world, this could be averted and the so-called Ohrid agreement, which significantly improved the conditions of the Albanians, could be signed (see Modern history). However, the Albanians have since demanded further improvements (see below and Current policy).

The Vlachs are a people group of disputed origins. They speak a language that is related to Latin and Romanian and is believed to be one of the oldest peoples in Southeastern Europe. In northern Macedonia they mainly live around the cities of Bitola, Resen and Kruševo.

Muslim Macedonians and Bulgarians are called pomakers (most pomaks live in southwestern Bulgaria). They form their own people group, which also has a disputed origin, and speak a Bulgarian-related Slavic dialect that lacks written language.

According to the constitution, Macedonian is national and official language. After a long and contested political battle, in January 2019, Albanian gained official language status alongside the Macedonian nationwide, albeit with some restrictions (see Current Policy). Macedonian applies to issues related to defense, national police and fiscal policy.

Macedonian is a South Slavic language that has great similarities, especially with Bulgarian but also with Serbian. It was introduced as a written language (written with the Cyrillic alphabet) after the Second World War, including as an attempt by the Yugoslav authorities to strengthen Macedonian identity and counter strong probulgar sentiments. In neighboring Bulgaria, Macedonian is seen by many not as a native language but as a Bulgarian dialect.

Albanian belongs to the Indo-European language family without being closely related to its other languages. It has elements of Turkish, Greek and Italian and is written in Latin letters.

In municipalities in Northern Macedonia where a minority constitutes at least 20 percent of the residents, the minority’s language is also the official language.

Number of residents per square kilometer

Percentage of residents in the cities