The earliest literature in Albanian dates from the 15th to 15th centuries. Languages ​​such as Turkish, Arabic and Persian have also been used. The use of Albanian language was at times greatly suppressed while the country was subject to the Ottoman Empire (Turkey), from 1468 to 1912. During the Communist regime (1944–1991), socialist realism was the official doctrine of literature. After 1991, the literature in Albania has been opened to new impulses from outside.

The oldest Albanian written memorials from the 15th and 16th centuries are religious texts. In the 1600s, a Catholic literature in Northern Albania developed towards Islamization, with Pjetër Budi (1566–1623) and Pjetër Bogdani (1630–1689), who wrote the first original Albanian prose work. Under Ottoman rule, Muslim writers wrote in Turkish, Arabic and Persian, inspired by Oriental lyric and folk poetry.

In the 18th and 19th centuries, there was generally little literary activity, because the Turks did not in principle allow Albanian writing. Only Albanians in Italy found literature in Albanian, among others, Jul (Gjul, Giulio) Variboba (1724-1788) wrote a poem about the Virgin Mary in 1762.

During the 19th century, a literary direction also developed among Bektashi writers, who wrote large epics in Albanian with Arabic script and with Shi’ite Islam motives, especially on the Battle of Karbala.

The foremost author of the early 1900s, and one of the greatest Albanian poets ever, was the Franciscan patron Gjergj Fishta (1871-1940). He was a fiery patriot and struggled to introduce Albanian language. His early work, the epic Lahuta e Malcis (Highland Tones) of the early 1900s, gives a picture of Northern Albania’s heroic history.

After the First World War, more modern currents won. Fan Noli (1882-1965) was an Orthodox priest, politician, historian and author. From 1906 he worked among the Albanians in the United States, and when he came to Albania in 1920, he became a leading democratic politician. He wrote antifoydale, patriotic poems and a historical work on Skanderbeg (1921), and was a significant translator. A socialist realist in the interwar period was Migjeni (MG Nikolla, 1911–1938).

Literature under the communist regime was characterized by socialist realism as official doctrine. Dhimitër Shuteriqi (1915–2003) wrote novels and short stories (a short story collection has been translated into Norwegian). Representatives of this literature include Jakov Xoxa (1923–1979), Petro Marko (1913–1991), Fatmir Gjata (1922–1989) and Dritëro Agolli (1931–2017).

Around the state theater in Tirana, a dramatic poem emerged that drew its inspiration from Albanian history and the partisan war, among others Kolë Jakova (1916–2002). The only Albanian author with international reputation is Ismail Kadare (born 1936), best known for his short stories and novels (several translated into Norwegian). In exile during the communist regime lived the literary historian Arshi Pipa (1920–1997) and philologist, lyricist and proseist Martin Çamaj (1925–1993).

Since 1945, rich Albanian-language literature has grown in Kosovo. After the fall of the communist regime in 1991, the literature in Albania has been opened to new impulses from outside. 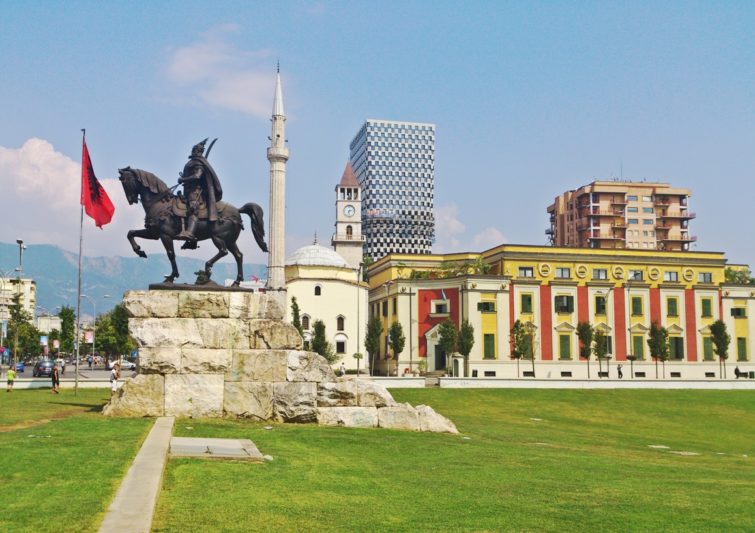