Luxembourg’s largest stretch east-west is just over 50 km, north-south approx. 80 km. The land is largely formed by the basin areas of the rivers Sûre and Alzette, both flowing into the Sauer, a bee to the Moselle. The northern third of the country, Ösling, is intersected by a continuation of the Belgian Ardennes, which links these with the Eifel in Germany. This meager plateau landscape of Devonian slate with some forest reaches altitudes of just over 500 meters. The highest point is Kneiff (560 masl). Buurgplaatz (559 masl) was previously mentioned as the highest point. Southern Thurs the 3rd part is called Gutland or Bon Pays (Well countries), and consists of wide, fertile valleys made up of sandstone and limestone.

The Vallée de la Pétrusse ravine passes through the capital and gives the city a distinctive character. The town is partly down in the gorge and partly on the plateau around.

Luxembourg has a temperate Central European climate of the same type as in eastern Belgium. Winters are long and often snowy, with average temperatures in January around freezing. The summers are hot and humid, with average temperatures in July of 16-18 ° C. The average annual rainfall is between 750 and 1000 mm. The Ösling region is somewhat cooler than the south-facing slopes of Gutland.

Plant life and wildlife in Luxembourg

About a third of Luxembourg is covered by forests, mostly oak and beech. The fauna includes 55 mammal, 9 reptile, 16 amphibian and 7 freshwater fish species. Almost 300 bird species are registered, and at least 130 of these breed annually. Especially the forest areas have a rich bird life with sparrow hawks, owls, woodpeckers, gulls, numerous singers and the national bird king. 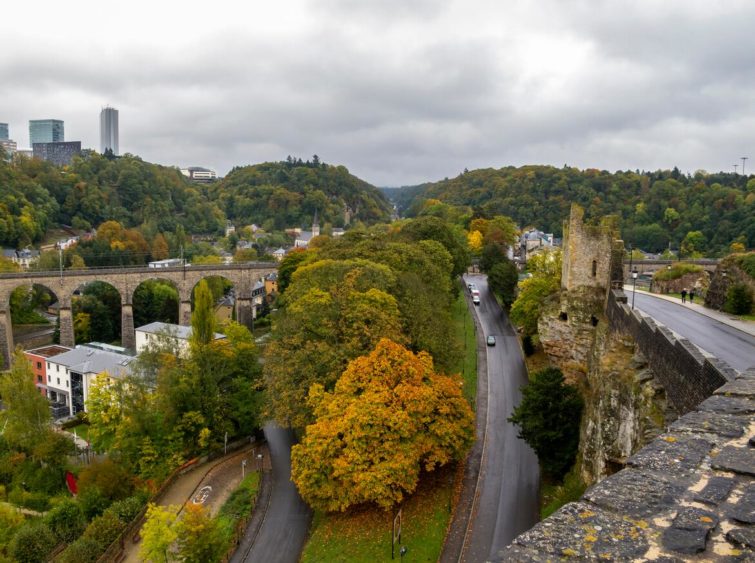 The country is 82 kilometers far north-south and up to 57 kilometers wide east-west. To the north, the Ösling Plateau landscape has low mountains and hills, which are a continuation of the Belgian Ardennes mountain range. The highest point is Kneiff at 560 meters above sea level. The southern two-thirds of the country (Gutland, ‘Good Land’) has high ridges and plateaus with wide valleys and fertile soil. The area further east is hilly and wooded. The Moselle valley along the southeast border is the lowest located area.

Luxembourg’s eastern borders are made up of the three rivers Mosel, Sauer (French Sûre ) and Our.

42 percent of the land has arable land, while just under a quarter is forested. In the north there is a lot of oak and beech and along the riverbanks black grouse and willow. There are many species of flower plants. 55 mammal species, nine reptile species, 16 amphibian species and seven species of freshwater fish have been identified. There are nearly 300 bird species, and the national bird is a bird king. 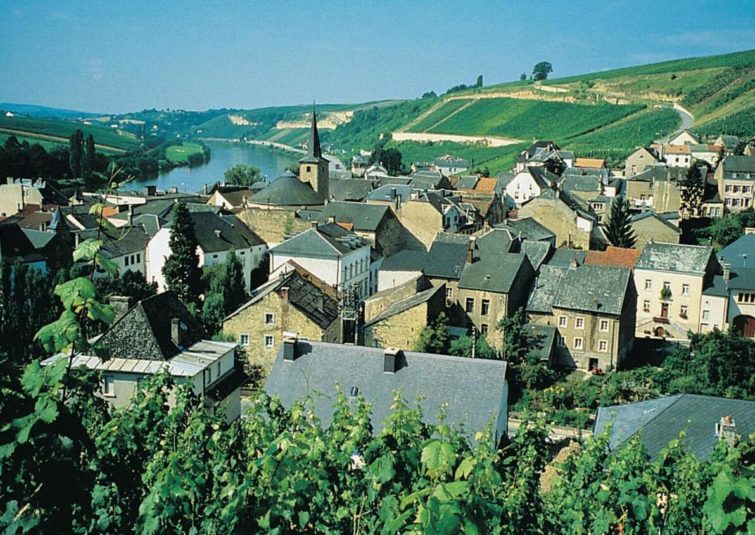 Landscape on the Moselle River southeast of the country, near the border with Germany. Grapes are grown along the hillsides.