Greece is a mountainous country with a very varied geology. The land has sunk so that the coastal land has been partially submerged, and archipelagos have arisen across the Aegean Sea. The entire area is structurally unstable, and earthquakes are common. Mountain ranges and bays divide the country into partly severely separated landscapes.

The Greek mainland, which forms the southernmost part of the Balkan Peninsula, consists of the furthest to the northeast of Thrace, to the west follows the landscape of Macedonia and the Chalkidiki Peninsula, to the south Thessalia, Viotia (Boiotia) and the Attica Peninsula, where the capital Athens is located. To the west of the Pindos Mountains is Ipiros. The bay of Corinth cuts almost entirely from the southernmost peninsula, the Peloponnese.

Thrace consists of flat and marshy coastal plains, intersected by the river Nestos (Mesta). To the north, the landscape rises to the Thracian massif, which is part of the Bulgarian Rodopi massif. Macedonia consists of a western mountain massif, which to the east is replaced by large plains around the rivers Aliakmonas, Axios (Vardar) and Strymonas (Struma).

The mountains of Thrace and Macedonia consist of granite and syenite masses. Olympos (Olimbos) furthest south of Macedonia is Greece’s highest mountain (2917 m asl). The extension of this mountain range includes the peaks Ossa (1978 masl) and Pilion (1548 masl). Thessalia is dominated by several large pools, including around the river Pinios (Thessaliasletta). Along the middle and western parts of the country, Pindos and several parallel fold chains run, as a continuation of the Dinaric Alps. The mountains reach 2500 meters above sea level, the highest being Smolikas (2633 meters). To the west of Pindos ‘main chain is Ipiros, which is fulfilled by Pindos’ anchors and river plains and pools, including around the Gulf of Art.

Southeast of Pindos lies the rugged “Attica Alps”, with drains to the Ionian Sea through Acheloos, the second longest river in Greece. The mountain ranges continue on the Peloponnese. in the Taigetos Mountains, where they run into four headlands before disappearing into the sea.

Greece has a multitude of larger and smaller islands. To the west along the mainland are Kerkyra (Corfu), Levkada, Kefallinia and others. The islands are mountainous and are the peaks of a sunken folding chain. Crete (8260 km 2 ) is the largest of the Greek islands and the fifth largest island in the Mediterranean. The island is mountainous with sharp-cut limestone mountains, and several of the peaks reach over 2000 meters. the highest is Idi (Ida, 2456 masl). The lime mountains have typical karst phenomena: gorges and caves with drip stones and underground drains for the water, which reappear in sources or accumulate in large sunken pits, poles.

The Greek Aegean Islands consist of four main groups. To the north are the islands off the coast of Thrace: Thasos, Samothraki and Limnos. These are remnants of the sunken part of the Thracian massif. Further south are the Northern Sporades, with Skyros, and Evvia (Evboia) just off the east coast of Attica. The Cyclades, the largest archipelago located in the middle, include. the islands of Paros, Naxos, Mykonos and Thira (Santorini). They are a continuation of the Greek fold mountains and remains of an original connection between the Balkan Peninsula and Asia Minor.. The main rocks are granite, slate and marble, except for Thira and some other volcanic origins.

The easternmost of the Greek islands is off the coast of Turkey and includes Lesvos (Mytilini) Chios and Samos as well as the Southern Sporades with the Dodecanese (Dodecanisa) with Rhodes as the largest island. 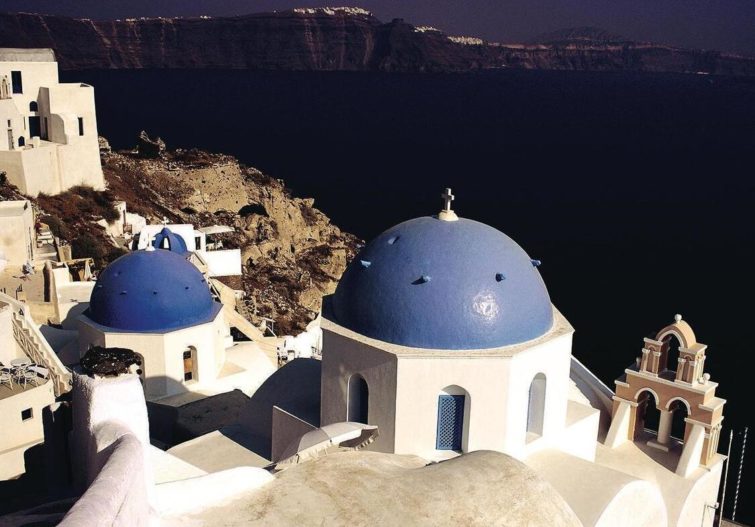 In addition to the mainland Greece consists of a number of islands in the Ionian Sea and the Aegean Sea. Thíra (Santorini) is a volcanic island in the Cyclades archipelago of the Aegean Sea. The island is part of a very crater and forms an open lagoon, approx. 60 km in circumference.

Greece lies partly in the temperate and partly in the subtropical climate zone. The coastal areas as well as the lower parts of the interior have a Mediterranean climate with mild, humid winters and hot, dry summers. The average temperature in January ranges from 10-12 ° C along the west coast and on the islands to approx. 5 ° C in the eastern regions. The average temperature in July averages 24-27 ° C. Northern Greece with Thrace, Macedonia and Thessaláa has a continental, temperate climate with frost and snow in winter.

The annual rainfall varies from 1000–1500 mm in the west to 400–500 mm in the eastern parts of the country. The Kerkýra (Corfu) thus gets 1320 mm, of which 1000 mm falls in the winter season, while Athens only gets 400 mm, also with a pronounced maximum in the winter. Precipitation falls especially in connection with the passage of “migratory” low pressure, which penetrates overland from the Atlantic and the Mediterranean.