Albania’s contemporary history is Albania’s history after the dissolution of the dictatorship in 1990-1991. In the post- World War II period, Albania was part of the Soviet- controlled Eastern bloc, but broke with the Soviet Union in the 1960s and then oriented itself toward Chinese socialism ( Maoism ). In 1990/1991, Albania’s 45-year era ceased as a communist people ‘s republic. The communist regime had been characterized by strict planning economics, isolation and considerable control of the population. 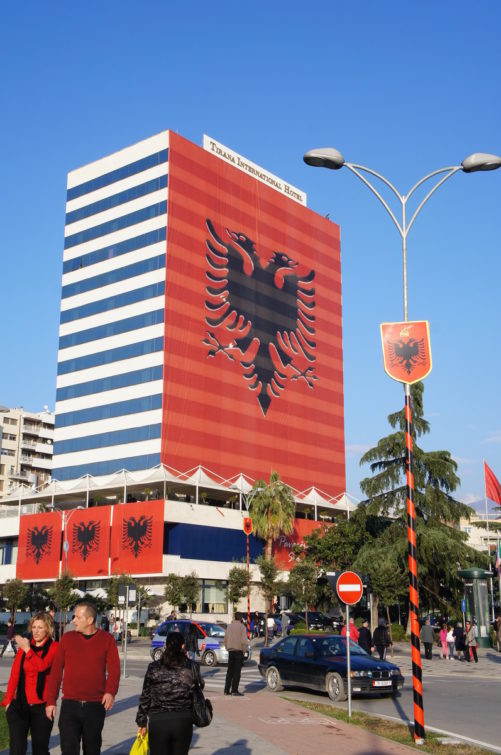 On November 28, 2012, Albania celebrated its centenary as an independent state. The picture is from the capital Tirana.

The transition to democracy and the market economy has been difficult and at times turbulent. The country is also struggling with corruption, high unemployment and organized crime.

The first free elections were held in March 1991. The Communist Party won 56 percent of the vote. The Democratic Party, which under Sali Berisha’s leadership had grown out of the anti-communist student movement, gained 39 percent. The communists stood strongest in the countryside, the opposition in the cities. After new, large demonstrations and strikes and a deteriorating economic situation, the government in June switched to a unifying government. At the same time, the Communist Party criticized its former Stalinist course and changed its name to the Socialist Party. Living conditions became increasingly difficult, and thousands of Albanians tried to flee to Greece and especially to Italy. There were also desperate famines.

In the March 1992 elections, the Democratic Party was the largest with 62 percent of the vote. In April, Sali Berisha became the country’s first democratically elected president. The first purely non-communist government, led by Aleksander Meksi, also took office in April. Its main goal was to restore law and order and to start the economy through reforms based on market economics and privatization.

In November 1992, the ruling party was split. In September, former Communist leader Ramiz Alia had been arrested, and in 1994 he was sentenced to several years in prison for abuse of power. A number of other politicians were also brought to justice, especially for corruption. The economic situation had become increasingly difficult in 1990-1992, but the period 1993-1994 showed cautious signs of improvement. 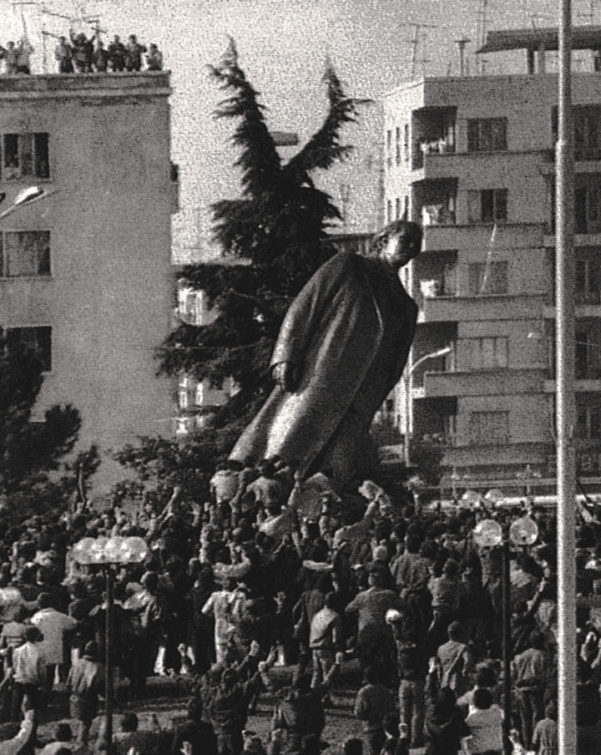 The monument to Enver Hoxha in Tirana is demolished by protesters in February 1991. Two months after Albania held its first free elections since the 1930s.

In 1996, the Democratic Party won the election, and demonstrations by the opposition were brutally beaten. Sali Berisha was re-elected as President of Parliament in 1997 despite a popular uproar after many saves were lost in investment funds that had been run as pyramid schemes. A multinational force led by Italy started security operations in the country in April. In March, Berisha threw Prime Minister Mexico and introduced a state of emergency. The Socialist Party won the new election in July. Berisha resigned and Socialist Rexhep Mejdani took over as president. The National Assembly then decided that the state of emergency should cease. Fatos Nano from the Socialist Party became prime minister of a five-party government.

In 1998, the political opposition was behind violent street riots, and the Nano government resigned following internal conflicts. Pandeli Majko took over as prime minister in a coalition government. In October, the National Assembly passed a new constitution. A referendum was held in November, and about 90 percent voted in favor of the new constitution. Despite OSCE observers approving the vote, Berisha’s Democratic Party refused to recognize the new constitution. The constitution was officially introduced in late November.

The conflict in Kosovo

The political situation in 1998–1999 was largely characterized by the conflict in the Yugoslav region of Kosovo. Albania strongly distanced itself from the Serbs’ assault on the Kosovo Albanians. The Albanian border area against Kosovo has in part been characterized by weak administration and lawlessness, and Albanian politicians expressed concern that the conflict in Kosovo could spread across the border. The tapping of the Kosovo conflict left a preliminary lid on the strong political contradictions in Albania. The opposition, which had long been absent from parliament, began to meet again in the spring of 1998.

When the situation in Kosovo worsened further in 1999, nearly half a million Kosovo Albanian refugees came to Albania. The country had great difficulties in taking care of the refugees and had to ask the international community for help. NATO sent a force of nearly 10,000 soldiers to Albania to assist with guarding and organizing relief efforts. The Albanian authorities gave NATO full control of the country’s airspace, ports and military facilities.

Towards the end of 1999, when the refugees had left Albania and the KFOR forces were in place in Kosovo, internal political tensions in Albania reappeared. At the end of October 1999, the government resigned. Socialist Ilir Meta became the new head of government and received support from the National Assembly in November. Berisha’s party boycotted the vote.

In the National Assembly elections in the summer of 2001, the Socialist Party received 73 of 140 seats, and Meta continued as prime minister. Berisha’s new alliance – the Victory Union – gained 46, but sought international support for the electoral outcome to be rejected. However, the OSCE approved the election and called on the Victory Union to stop the boycott of the National Assembly; in October the new grouping began to meet in parliament. This election was considered a crucial test for democracy and stability in Albania. Meta put together a new government and called for EU membership. After internal turmoil in the Socialist Party, Meta resigned in January 2002, and Pandeli Majko became prime minister. In the summer of 2002, former General Alfred Moisiu became appointed new president. In July, Prime Minister Majko resigned and the party trap, former Prime Minister Nano, took over.

In August 2002, Albanian, Yugoslavian, Greek and Italian authorities launched a secret operation to crack down on drug trafficking and illegal immigration in Vlorë. The operation led to several police officers being charged with illegal activities. The head of the national intelligence agency had to step down after allegations of involvement in organized crime and political assaults. Several public officials were arrested and indicted for assault and abuse of power.

Relationship with Italy and Greece

After 1990, Albania has normalized its relations with both individual countries and international organizations. The relationship with Italy has been important, and Albania has received a lot of financial help from it. Relations with Greece have been tense several times, with disagreement over the treatment of the Albanian minority in Greece and the Greek in Albania. Large influx of Albanians to Greece on the run from poverty at home has created negative reactions in Athens. Many Albanians believe Greece really has ambitions to annex Southern Albania (Northern Epirus). On the Albanian side, there are also concerns that Greece has not repealed a World War II law, so Greece and Albania are technically still at war. When Prime Minister Sali Berisha stated in November 2012 that parts of northeastern Greece had belonged to Albania, it created negative reactions in Athens.

Relationship with Kosovo and Serbia

The situation for the Albanians in Kosovo (Serbia) led to concerns in Albania, not least during the violent assaults in Kosovo in 1998-1999. Many Albanian families opened their homes to the large number of refugees from Kosovo. In addition, relations with Yugoslavia were tense because the KLA guerrilla in Kosovo had training camps and bases in Northern Albania during the 1999 crisis. After Slobodan Milošević resigned in 2001, Albania and Yugoslavia restored diplomatic relations.

Albania has also had a tense relationship with Northern Macedonia because of the oppression of the Albanian population there. During the unrest in Albania in 1997, it was reported that several armed Albanian groups crossed the border; Among other things, two people from the Macedonian security force were killed by Albanians who had illegally entered northern Macedonia. In the fall of 1997, Albania and Northern Macedonia signed an agreement to better secure the border area. The conflict between Macedonian government forces and the Albanian NLA guerrilla in 2001 brought new tension between the two neighboring states, although Albanian authorities confirmed opposition to the NLA guerrilla’s goal of a Greater Albania. During the conflict, many refugees from northern Macedonia came to Albania. In the summer of 2003, a conference was held between the presidents of seven nations in the Macedonian city of Ohrid. The goal was to establish a dialogue between Macedonians,

Albania was the first of the former Eastern Bloc countries to apply for NATO membership in 1992. In 1994, Albania became a member of NATO’s Partnership for Peace program. During the 1999 Kosovo crisis, Albania supported NATO’s military actions and allowed the alliance to use the state’s air and sea territory. The same was repeated during the crisis in Northern Macedonia in 2001. In 2002, Albania, Croatia and Northern Macedonia worked out a common strategy for NATO membership, and in 2009 Albania became a member. Since 1991, all governments in Albania have had EU membership as a priority area.