Belarusian culture has evolved in the span between a national cultural heritage with strong roots in the rural culture of the countryside, and external influences, especially in the form of an urbanized classic cultural heritage that has been communicated through regional centers of power such as Warsaw and Moscow. In the last century, Russian and Soviet influence in particular has been strong.

A central figure in Belarusian cultural history was the humanist Frantsysk Skarina (c. 1490 – c. 1541), who introduced the printing press in Eastern Europe and translated the Bible into Belarusian (1517).

The founders of modern Belarusian literature are the lyricist and playwright Janka Kupala (1882–1942) and the lyricist and proseist Jakub Kolas (1882–1956). These two also became the central figures in Belarusian literature after the establishment of the Belarusian Soviet Republic in 1919, and they have had a decisive influence on the new poetic generations. Of modern Belarusian writers, especially Vasil Bykaw (1924–2003) has gained great popularity with his depictions of humanity from the days of the war, where ethical issues are at the center of manufacture.

The Belarusian theater tradition gained a foothold in the early 1900s, as a result of having good playwrights like Janka Kupala and new opportunities to establish permanent theaters in Minsk. Today, the national theater in Minsk, the Russian theater and the opera are important theater institutions with great recognition, but after 1991 we have also seen the emergence of independent theater groups such as “Free theater”.

Folk music has a completely dominant place in Belarus’s music scene, with roots in early East Slavic culture. The traditional resistance to cultural assimilation has helped to preserve more archaic style in Belarusian than in neighboring folk. The association with traditional contexts, such as harvest, spring and summer rituals, weddings and births, has helped to preserve the distinctive character of folk music.

An important example of early Belarusian architecture is the large Byzantine domed, five-layered Cathedral of St. Sofia in Polatsk, built in the 11th century. It shows relationships with similar cathedrals in Kiev and Novgorod. With Catholicism, a number of Italian architects came to the country and brought new impetus. In the 17th century, both Orthodox and Catholic churches followed essentially the same pattern: three-tiered domed basilicas with two towers. This tradition still characterizes Belarusian church architecture.

The establishment of the Belarusian Socialist Soviet Republic required new public buildings, such as the government building in Minsk (from 1929 to 1934) and the Opera and the Ballet Theater (from 1934 to 1939). The major damage during the Second World War created a great need for the reconstruction of cities and villages, but the resources were concentrated on one major project: the planning of the Lenin Prospect (now the Independence Prospectus) parade in Minsk, which was to represent the Belarusian Republic. The paradise has monumental examples of Stalinist empirical architecture.

Early Belarusian painting shows the influence of Byzantine art and folk art. Eventually, the western influence became stronger. Outstanding examples of Belarusian Renaissance art can be found in Frantsisak Skaryna’s woodcuts and printed books. Marc Chagall was born in Vitsebsk in 1887 and many of his best known paintings are painted here. After the October Revolution of 1917, the city became the arena for an avant-garde art environment. Chagall started an art school here, where, among other things, Kasemir Malevich was a teacher. 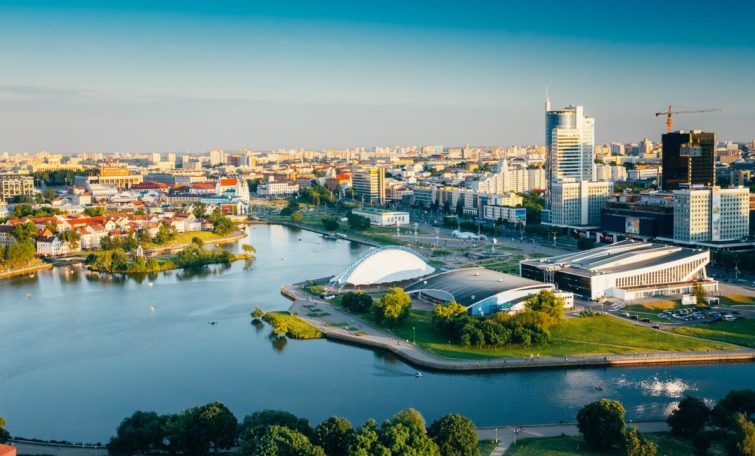 About three-quarters of the population lives in cities. The largest cities are the capital Minsk, Homel, and Vitsebsk.