The connections over the sea had become increasingly important. Already in the centuries around the birth of Christ, sailors had begun to cross the sea between Arabia and India and between India and Southeast Asia in the rhythm of the annual monsoons and in the direct line without clinging to the shores. With the Islamization of the Middle East from the 600’s. this voyage seems to have taken a sharp rise due to the participation of Arab merchants. For some centuries, Arab merchants regularly made voyages all the way to China, but from the 900’s. this direct trade was replaced by smaller networks. Arab merchants continued sailing on India, but rarely beyond the Straits of Malacca. Chinese ships began most recently from the 900’s to sail to SEA Asia and reached during the Song Dynasty all the way to the southwest coast of India, the Malabar coast.

The internal maritime trade in Asia, like the European one, was of increasing importance in the last centuries of the Middle Ages, but in contrast to the situation in Europe, it seldom invoked the interest of the larger states. A single significant exception, however, is the Chinese naval expeditions during the Ming Dynasty, which from 1368 replaced the Mongol Yuan Dynasty. Under the leadership of the eunuch Zhenghe, a series of naval expeditions were carried out in 1405-1433, bringing the Chinese high seas ships to virtually all major ports in Asian waters. It was a far greater effort than the contemporary Portuguese voyages of discovery along the West African coast. Technically, there was nothing to prevent the Chinese ships from continuing to Europe or America, but the nomads pushed towards the kingdom’s borders, and China turned its back on the sea again.

According to Countryaah website, there are over 40 countries in Asia and trade in Asian waters was linked to emporicism, i.e. port cities which were conveniently situated in relation to the dependence of shipping on the annual rhythm of the monsoon winds, and whose princes ensured the merchants the necessary legal certainty. During the 1400’s. The main emporias were Aden at the entrance to the Red Sea, Hormuz at the entrance to the Persian Gulf, Cambay on the west coast of India, Kozhikode (Calicut) further south and Malacca, which dominated the narrow waters between Sumatra and the Malacca Peninsula. Thus, after the discovery of the sea route to India in 1498, the Portuguese encountered a fully developed network that probably to some extent supplied exotic goods such as peppers and other spices to Europe, but first and foremost linked the Asian markets.

With the discovery of the sea route to India, the period leading up to European rule over large parts of Asia began in the 1700’s-1900’s. The Portuguese remained in the 1500’s. by virtue of the strength of their ships and their superior gunners able to levy customs duties on parts of the internal Asian shipping industry, though probably primarily because none of the major Asian states found it essential. Political power in the Asian states rested on the mastery of agricultural land, and the transportation of goods by the rivers of India and China was far more important than trade by sea. The ancient empires received little support in their struggle against the Portuguese – Hormuz and Malacca were conquered, Kozhikode was isolated and taken over by the Portuguese conquest of Goa. However, there was no question of any complete mastery of the Asian maritime trade.

From the beginning of 1600-t. Dutch and English trading companies also began trading in Asia. The companies initially had only political ambitions to the extent they deemed necessary to protect their own trade. They failed to challenge the major Asian states and were thus able to obtain fortified strongholds in India and South Asia without much difficulty.

The centuries after 1500 were in most of Asia marked by a fairly high degree of stability. The Middle East and India were ruled by the three “gunpowder empires”, the Ottoman Empire, the Safavid Empire in Persia and the Great Mughal Empire in India. In China, the Ming Dynasty from 1644 was replaced by a nomadic dynasty, Manchu, which adopted the Chinese name Qing and, despite its origins in the steppe country, relied heavily on the Chinese tradition. Japan and Korea also stabilized; the same was the case despite many internal struggles in South-East Asia, where most of the states rediscovered on the modern world map – such as Myanmar (Burma), Thailand, Cambodia and Vietnam – were finding their form. The biggest changes occurred in northernmost and central Asia. In the north, Russia extended during the 1600’s. its dominance all the way to the Pacific Ocean beyond the sparsely populated forest belt north of the steppe and attacked Central Asia from the west, while China at the same time from the east extended its dominion over Xinjiang, Mongolia and Tibet. In Manchuria, the two kingdoms came into contact with each other, and with the Treaty of Nertjinsk 1689, the first treaty between China and a European state, the border relations between the two empires were settled.

For reasons not yet known, the three “gunpowder empires” weakened in the early 1700’s. This was especially far-reaching for India, where from the middle of the century the English East India Company succeeded in acquiring tax collection rights over some of the richest areas. The domination of India, which was transferred to the English crown in 1858, became the starting point for the building of an English empire in Asia, first imitated by the Dutch in Indonesia and in the last decades of the 1800’s by France in “Indochina”, the easternmost parts of Southeast Asia..

Europe’s mass production of industrial goods created from the early 1800’s. need for new markets and for access to more raw materials. Asia was involved in the rapidly growing world trade, and Europe’s technological superiority in the 1800’s. made Asian conquests “cheap”. The changes in economic and political conditions that came to Asia across the sea forced some of the most profound changes in the history of Asian cultures. Both the states that formally retained their independence, such as China, Iran, Japan, and the Ottoman Empire, and the European colonial territories acquired and adapted to European technology, legal norms, and cultural features, albeit always in a complex interplay with older cultural layers.

The age of direct European imperialism ended after World War II and was almost as short as the Mongol storm of the 13th century, but contemporary Asia is involved in the modern world in a way that perhaps more than ever makes it impossible to talk about a particular Asian history. The political history of the post-war period was long linked to the Cold War, but other lines of development are likely to have greater significance in the longer term. Economic development plays a key role everywhere as a political objective. Early implemented in Japan, but also, for example, in Thailand, Taiwan, the Philippines, South Korea, China and India, modern industrial cultures have developed, but only rarely as copies of Western industrial societies. The involvement in the modern world market, the membership of the modern state society, the close contact with international currents of ideas seem to be indispensable facts in contemporary Asia. It has led to profound changes, but everywhere in an original interplay with older historical layers and not as a mechanical reproduction of Western role models. Extremes such as religious fundamentalism and ultra-modern urban environments occur in the early 2000’s. most conspicuous, but between the traditional and the modern, the slow development and adaptation of millennia continues.

Politically, South Asia has been marked by the protracted conflict between India and Pakistan over Kashmir. Pakistan also played a key strategic role in the US-led coalition’s war against the Taliban regime in Afghanistan. 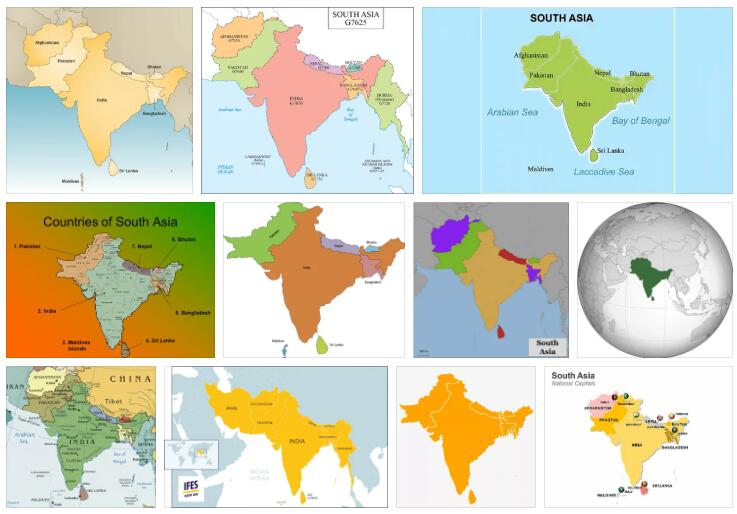 In the Middle East, terrorism and oil resources – along with the collapsed peace process between Israel and the Palestinians – have had a major impact on development. A number of countries in the Arab world have had to carry out a difficult balancing act between, on the one hand, the interests of American interests, including the US-led “war on terror” from 2001, and, on the other hand, pressure from dissatisfied sections of the population.