The earliest buildings in Belarus were erected in wood and are not preserved for posterity. In the 1100s and 1200s, churches were erected in a distinctive Belarusian Romanesque style, inspired by Byzantine and East Slavic models. The large Byzantine domed, five-ship Cathedral of St. Sofia in Polatsk, built in the 11th century, shows kinship with similar cathedrals in Kiev and Novgorod, as well as the Church of the Annunciation (Vitebsk, early in the 11th century).

With Catholicism, among other things, a number of Italian architects came to the country and brought new impetus. In the 1600s, both Orthodox and Catholic churches followed essentially the same pattern: three-tiered two- towered basilica, for example the Jesuit Church in Grodno (1647–1663). The Byzantine tradition was still alive in eastern parts of the country. In the west, basilicas were built with twin towers or without towers, decorated with patterns from the various religious orders.

The Baroque style is found in both Orthodox and Catholic churches from the 18th century. During this period, a number of European architects designed palaces and park facilities in Belarus, such as the new castle in Grodno (1737–1744) and the Sapieha Palace (1741–1744), both in late Baroque style. In the first part of the 1800s were built palaces in neoclassical style and domed churches in the Empire style.

Towards the middle of the century, a “Russification” is noted in architecture, especially in eastern areas, such as the Mogilov Theater and the Napoleon Victory Monument near Vitebsk. In western areas, the history of architecture is noticeable. Particularly common are buildings with neo-Gothic elements, such as the Catholic church in Pastavij. In some places, the two style directions stand side by side; The Bieraście Fortress as a whole is executed in a Neo-Gothic style, but a Russian Byzantine-inspired church is found on the fort’s territory.

The major damage during the Second World War created a great need for reconstruction of cities and villages, but the resources were concentrated on one major project: the planning of the Lenin Prospect parade in Minsk, which was to represent the Belarusian Republic. It has monumental examples of Stalinist empirical architecture, for example the State Bank (1949–1953) designed by Mikhail Parusnikov (1893–1968). The parade street is today called Independence Avenue.

Wall paintings and illuminated manuscripts from the 12th century show the influence of Byzantine art and folk art; for example, local human types are used as models, and native ornamental motifs form patterns in clothing and backgrounds.

Catholicism brought impetus from the west. The icon painting was strongly influenced by Western European art in the 16th century. Unique examples of Belarusian Renaissance art can be found in Francisk Skorina’s (1486–1551) woodcuts and printed books.

Portrait painting was a popular genre in the 1600s and 1700s, and greater emphasis was placed on producing human anatomy and rendering light and shadow according to western patterns. By the end of the 18th century, Franciszek Smuglewicz (1745-1807) painted portraits and history paintings in an early neoclassical style.

19th-century paintings were characterized by neoclassicism on the one hand, romance and sentimentalism on the other. A number of Belarusian artists received their education in St. Petersburg. Jan Chrucki (1810-1885) is best known for his still life, where he combines the tradition of East Slavic icon painting with impulses from Western European art. History painters Jan Damel (1780-1840) and January Suchodolski (1797-1875) painted pictures from the Napoleonic Wars, and Apalinary Harauski (1833-1900) won fame for his landscape paintings. Art associations and a number of drawing schools were established, including in Vitebsk and Minsk.

Marc Chagall (1887–1985) was born in Vitebsk, and many of his best-known paintings are painted here. After the October Revolution of 1917, the city became the arena for an avant-garde art environment. Chagall started an art school here, where both Kasimir Malevich (1878-1935) and El Lissitzky (1890-1941) were teachers. From 1920 the school followed Malevich’s supremacy in teaching. After three years, he was asked by the authorities to leave the city, and the school then followed a more moderately realistic program following the new Soviet ideals.

From the 1930s, painting in Belarus, as in the rest of the Soviet Union, was dominated by social realism. A later painting by Mikhail Savicki (1922–2010), Madonna and Children or Partisan Madonna (1967), breaks with this pattern and is done in a genuine Belarusian style. Unofficially, experimental, modernist works of the Soviet era were also painted, first exhibited to the public from the 1980s.

Distinct Baroque sculptures show close connection with the folk tradition. Especially worth mentioning are the 18th century carved iconostas in wood, where the figures give the impression of being a circular sculpture. A number of wood carvers worked in Moscow in the late 1600s. A central work from this period is the iconostasis of the Smolensk Cathedral in Novodevikhy, Moscow (1685).

In Soviet times, Belarusian sculptors performed propaganda sculptures, such as Karl Marx in Vitebsk (1919), Minsk (1920) and Monument to the Revolutionary Soldier (1917-1919, Minsk). Abram Brazer (1892–1942) and Alexander Hrube made woodcarvings in the 1920s and 1930s in a folkloric-inspired style. For the government building in Minsk, among others, Zair Azgur (1908-1995) made portraits, friezes and bas-reliefs. 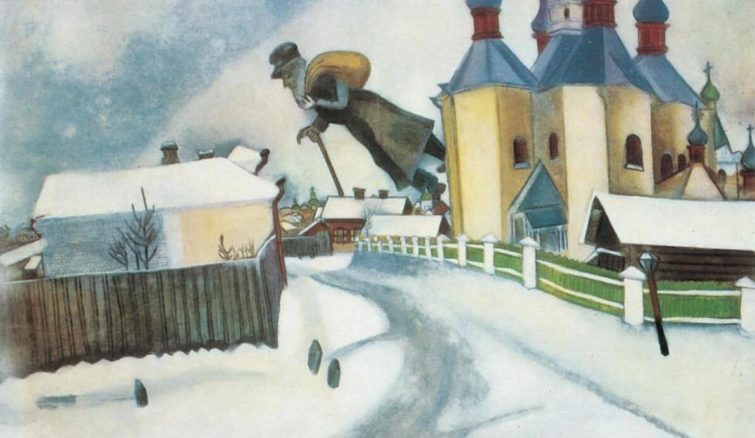 Marc Chagall was born in Vitsebsk in 1887, and many of his best-known paintings were painted here. About Vitsebsk (1914). Painting, 73 x 92.5 cm. The Art Gallery of Ontario, Toronto.