Malta has a unique prehistoric art, known for its numerous megalithic temples and sculptures. The roots of this art are yet to be determined. Soft fine-grained limestone formed the basis for the island’s characteristic sculptures, most of which are found in the Archaeological Museum, Valletta. The earliest finds are from around 5000–4000 BC, i.a. ceramics from Sicily and small stylized women figures in terracotta, the latter showing some resemblance to Cycladic figures.

From about 3000 to 2500 BC there are a large number of sculptured pieces, modeled in terracotta or carved in stone; the greatest are probably portraits of divine figures. Findings from the temple in Tarxien show a fat human figure who must have been about 3 m high, and a number of smaller figures. Noteworthy are also a series of sculptures from Hagar Qim, including the so-called Venus from Hagar Qim. Excavations in Xaghra, Gozo, 1987–93, have uncovered several thick-skinned sexless figures, all of high quality. Finely carved relief patterns, mainly spirals with fish tails, of up to 3 m high rectangular boulders, have been found in the temples of Tarxien. Some stones are also decorated with sheep and other animals. Copies are listed at the discovery site, the originals are in the Archeological Museum, Valletta.

Beautiful gold and silver jewelery from the Phoenician era is decorated with griffins, palmettes and sun symbols. From Roman times some body-sized marble sculptures have been preserved as well as fine mosaic floors.

The art of painting in Malta shows the influence of Latin Christian Mediterranean art. The connection with the court in Aragon (1282-1530) produced a masterpiece; a polyp theater of St. Paul (Mdina Cathedral Museum). The Renaissance was developed by Antonello da Messina’s Sicilian successors.

The Johannite order brought with it a number of art treasures, and after the founding of Valletta in 1566, a number of prominent artists were invited to the island. Caravaggio lived in Malta 1607–08, and painted some of his famous pictures here. Mattia Preti’s roof decorations at St. John’s Cathedral, Valletta, are considered the finest south of Rome. Preti’s personal Baroque style mixed Neapolitan caravaggianism with Venetian wealth, and became of great importance to Maltese art.

Influence from Rome began from the late 18th century, and is noticeable by artists such as Antoine de Favray, Salvatore Busuttil and Pietro Paolo Caruna. A central work in Roman Baroque is the wooden sculpture St. Lukas (Malta National Museum, Valletta) by Pietro Papleo. The Maltese sculptor Melchiorre Gafa (1635-67) received the attention of Bernini himself during his stay in Rome. In the 19th century, the British introduced neoclassicism into monuments to tombs and public parks.

The Art School in Malta was established in 1921, and artists such as Anton Inglott, Giorgio Preca and Willie Apap completed their education at the Academy in Rome. These painters again inspired a group of artists who in 1952 formed the Modern Art Circle. Prominent sculptors of the 20th century were Antonio Sciortino, Georg Borg and Vincent Apap. 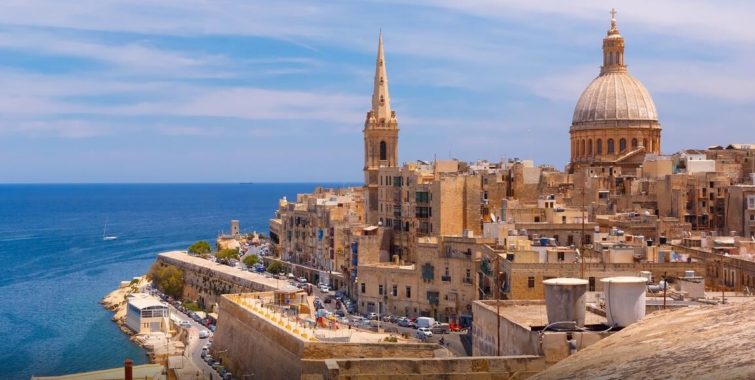 Folk music unites Southern European and North African traditions, with a variety of vocal and instrumental forms. Shows are often performed by two or more singers, often with a guitar tone. Other folk instruments include żaqq (bagpipe), tambour (tambourine), rabbâba (friction drum), mandolin and accordion. A colorful music scene unfolds at the traditional party, with outdoor horn music to procession by celebrating local patron saints. Up to the 19th century, art music was characterized by Italian chaplains, organists and singers.