In the capital Chişinău, the contrast is great between older and newer architecture. The picture shows the Arc de Triomphe (1840), erected in neoclassical style.

In the 9th century AD cities developed, surrounded by fortifications. In the 1400s and 1500s, cities often consisted of citizens with surrounding settlements, and marketplaces began to become commonplace. Fortified citizens were raised in Stary Orkhey, Soroki and Bendery. A local Orthodox church architecture was developed in the 16th century; the main form was the sole ship with an extended narthex (porch). A unique system, known as the “Moldovan vault”, where two arches carry a dome, is found, among other things. in the church (1774) to the Rud monastery. Unique examples of 16th and 16th century architecture can also be found in the caves of Sakharna and Zhabka.

In the 19th century, cities developed rapidly, and buildings were mainly erected in neoclassical style. The Communion Church (1835) and the Arc de Triomphe in Chişinău (1840) et al. The latter half of the 19th century and the beginning of the 20th century are characterized by an eclecticism in architecture. In Romania-occupied Bessarabia (1918-40), a number of private houses were erected in Art Nouveau and in the constructivist style, while in the Moldovan Autonomous Soviet Socialist Republic public buildings and multi-storey dwellings in the classicist style were erected, occasionally with the influence of constructivist style. Among the most important buildings of the period are the buildings at Teaterplassen (1936) in the center of Tiraspol.

After World War II, cities were rebuilt and modernized, and in the 1940s and 1950s buildings were decorated with ceramic tiles and stone reliefs. From the 1960s, the architecture was softened with, among other things, balconies and loggias as well as with colorful decoration. 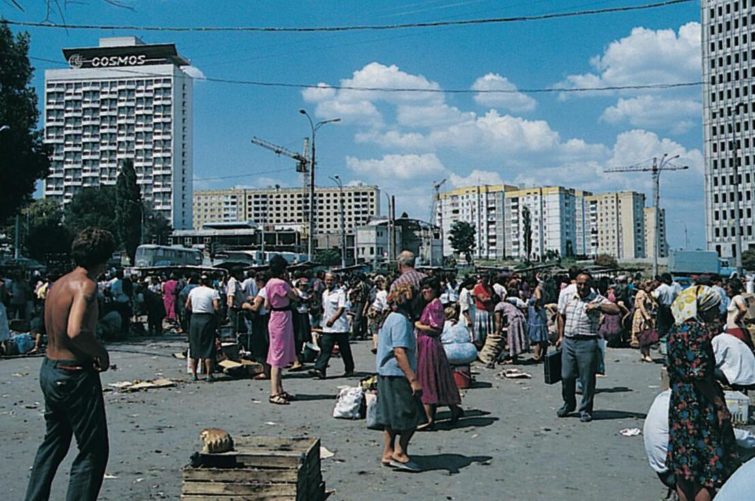 Outdoor market between high-rise buildings from the Soviet era.

Moldovan visual art is associated with the church in the 16th and 16th centuries. Mural paintings were made in exteriors and interiors, showing impulses from the Balkans, Byzantine art and folk art. Icons created in the 17th-18th centuries are based on Russian traditions combined with folk art techniques. The faces are often modeled in light and shade and contrast with the flat fabric of the clothes.

Illuminated manuscripts from the 1400s to the 1600s are often decorated with geometric motifs in blue, red and brown, with a gold background. The 19th century showed a growth in worldly art, especially in portraiture where Russian models were used. Typical scenes from Moldovan nature and depictions of peasants at work were also popular.

The art of the 1920s and 1930s adhered to social realist principles. During the Second World War, a number of paintings and sculptures were exhibited which showed the people’s struggle against fascism. A major work is the dramatic Moldova on fire (1943), a sculpture group by Lazar ‘Dubinovsky (1910–82), which is also known for a number of portraits and genre groups as well as the monument to the heroic Komsomol in Chişinău (1957).

In the late 1950s and early 1960s, artistic freedom and individualism in Moldovan painting increased. Prominent artists include Valentina Rusu-Ciobanu and Mikhail Greku. A major work is Greece’s Triptych The History of a Life (1967, Tretyakov Gallery, Moscow). Rusu-Ciobanu is especially known for its distinctive, expressive portraits. In the 1980s, paintings were performed in an abstract expressionist style, enriched with elements of local art tradition. Artists such as Igor Viyerus, Mikhail Burya, Ivan Zhumany, Sergei Kuchuk and Eleonora Romanescu have depicted Moldovan folk and landscapes in a lyrical and poetic attitude, incorporating elements of traditional folk art. 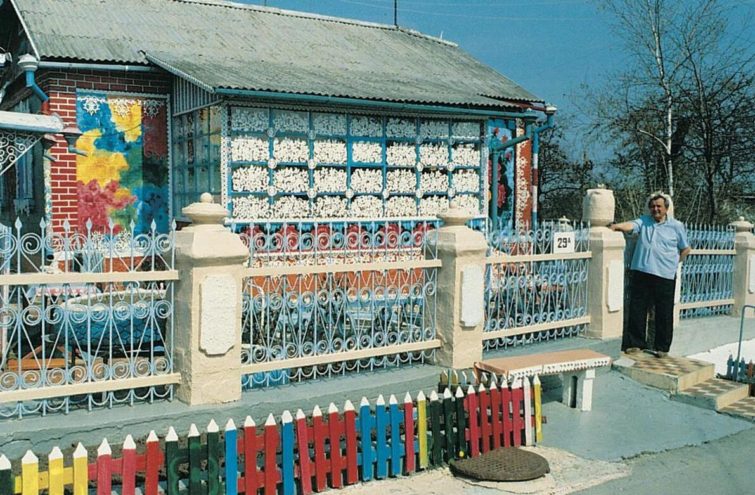 In recent times it has become popular to decorate buildings with colorful decoration. The white patterns are painted right on the window glass.